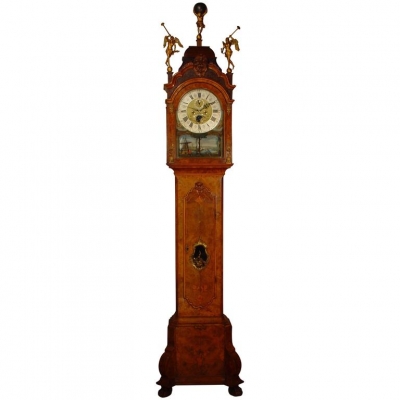 33.5-cm brass dial with an engraved silvered chapter ring signed M.s Buys Amsterdam. The matted centre with foliate scrolls below the penny moon with day of the moon cycle. Above the subsidiary for seconds enclosing the date aperture. Well shaped blued hands and a silvered alarm disc. Below the chapter ring a painted theatrical opening with two deities revealing a swing with a noble lady being pushed to and fro’ by two noblemen by the beating of the pendulum. Behind to the left a windmill which is activated by the striking train. In the background a painted landscape with a river and a town.
The weight driven movement is of eight day duration and has anchor escapement and Dutch quarter striking on two alternating bells. The going train moves the swing, the striking train makes the windmill turn. The movement has an alarm striking on the large bell.
The case with bell top is surmounted by a parcel gilt Atlas and two heralding Angels above the well shaped cornice with a finely carved ornament. The pilasters to the sides have brass capitals and playful scrolling flowers applied. Canted corners flank the long shaped door with brass basket lenticle. The molded base has protruding scrolls on the canted corners above the claw and ball feet. The whole veneered with burr walnut, subtle marquetry inlay to the door and base. 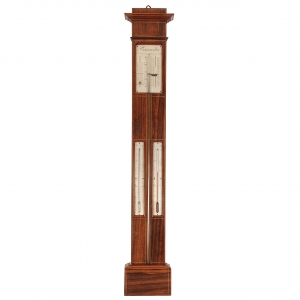 A French rosewood stick barometer, by Vion, circa 1840 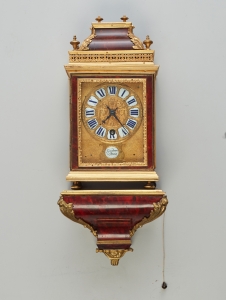 A small tortoiseshell French bracket clock by Gaudron a Paris, circa 1690 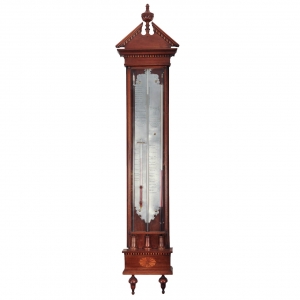 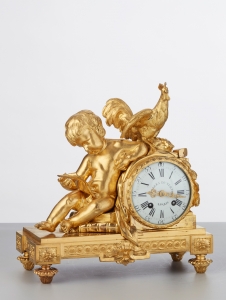 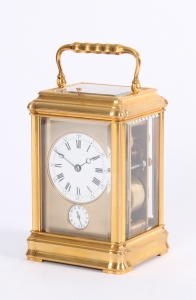