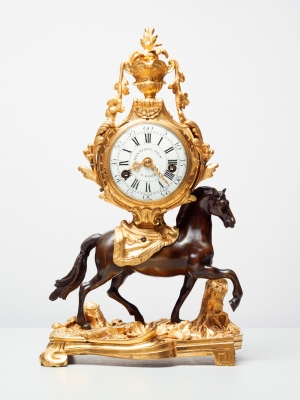 This rare clock demonstrates design influences from the short ‘Transition’ period which marked a change in style between Louis XV and Louis XVI and lasted only a few years. This change in style is captured in this unusual clock and demonstrated by the contrast between the lovely patinated elegant bronze horse and the nicely cast gilded bronze clock. In addition the position of the horse, the design of the base and the unusual design of the urn surmounting the clock, reflect this ‘Transition’ period. The clock has a strong ‘Transition’ dial, signed Montjoye Fils a Paris, together with lovely gilded pierced hands. The striking movement is of two weeks duration with a short pendulum.

The Montjoye family were amongst the foremost clockmakers in Paris working between 1730 - 1815.  Based in the Rue Dauphine, they gained immediate recognition among Parisian connoisseurs of fine horology and they worked for many of the important merchants of the time, such as Dominique Daguerre. They collaborated with remarkable artisans including Charles Cressent, Jean-Joseph de Saint-Germain and the Osmond family of bronze casters. 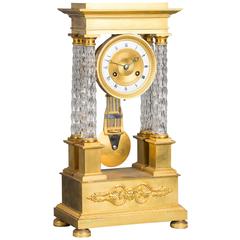 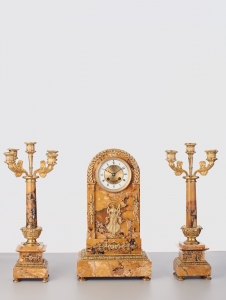 A French sienna marble clock with candle holders, circa 1890 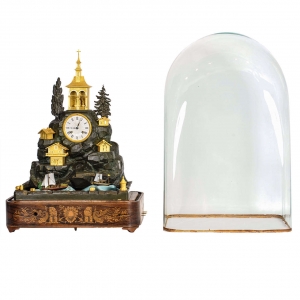 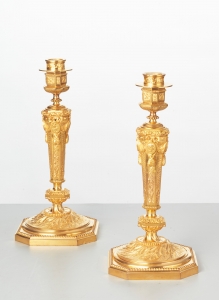 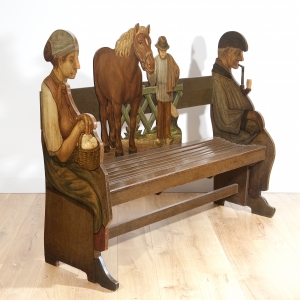 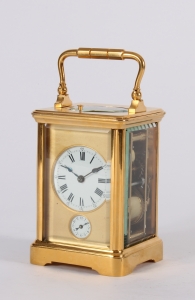